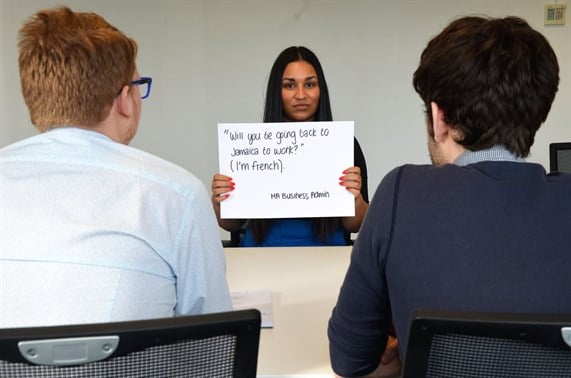 Discrimination in the workplace is unlawful, and employers abusing protected characteristics such as age, race, and sex can find themselves in legal battles. But how seriously are such laws taken? We decided to find out. Despite education and advanced qualifications, graduates are still being discriminated against in job interviews. We found this out when we surveyed UK graduates and asked: ‘what’s the worstquestion you have ever been asked at interview?’ What’s the law? Best practice tells us that employers should adopt a standardised process to the submission of CVs. There has been debate about anonymised CVs which would mean that when submitting a CV, a candidate would notbe requiredto disclose his or her name. This may go some way towardsstopping unconscious bias against ethnic sounding names. This is currently being debated and would mark further legislation that employers must abide by. Nigel Farage has pledged that, if in power, he would abolish much of the anti-discrimination legislation. Farage’s claim is that we’re in a much better position now than we were 40 years ago.Whilstsome find the idea of this unsatisfactory, others agree that protectionhas gone too far and taken away rights from employers, tying them in knots when it comes to hiring and firing. Interview discrimination Whether it’s just ill-advised, or something that’s always been the ‘norm’, we were shocked to hearsome of thequestions that UK students have been asked in 2015. HR professional Renae Jackson says: “Discrimination can occur during the candidate screening stages, the interview process and really anywhere throughout the remainder of the employee life cycle. So the laws are there for the right reasons. Even the most well-intentioned employer can unwittingly leave themselves open to litigation though. HR professionals must taking care to consider things like spell check facilities for candidates on the recruitment website and make sure that nothing will either directly or indirectly disadvantage applicants with a disability.” Meredith Hurst, employment lawyer, of Thomas Mansfield adds: “Without even realising it, employers can ask seemingly innocent questions and break the law in the process; however, with employment law information so readily available online, there really is noexcuse for insensitive questions or illegal practices.” The followingare some of the questions that have been asked in interviews: “Will you be going back to Jamaica to work?” (I’m French) “Do you get PMT?” “What do you think about dating someone in the office?” “Is that a hickey on your neck?” -It was a birthmark “When was the last time you did drugs?” “Would you do this for free? “Are you planning on having children soon?” “Can you wear more make-up next time?” “Can you flirt with customers to make them stay longer?” What are your own experiences of work interviews? Tell us below, or on Twitter at @ThomasMansfield

Don’t get dismissed this Christmas

TUPE: Single employee can amount to an organised grouping